The Team at Enjoy the match would like to pay tribute to Yahoo Internet Cafe, a true innovator in developing both Sport and World Wide Web access to all.  Through the medium of an Internet Cafe and bringing people together from all walks of life.

It was back in 2006, I was first introduced into this awesome idea and concept.  For those of you who are unaware of what the Yahoo Internet Cafe stands for, please see below:

Sponsored by Yahoo! Mail  – Who revealed the winning internet cafés as a result of the inaugural Internet Café Awards.

This coincided with the 10th anniversary of the first ever Internet café – Café Cyberia, which opened its doors in London on Sept 1st 1994. The winning cafés along with the best of the rest also feature in a special edition Rough Guides e-book. 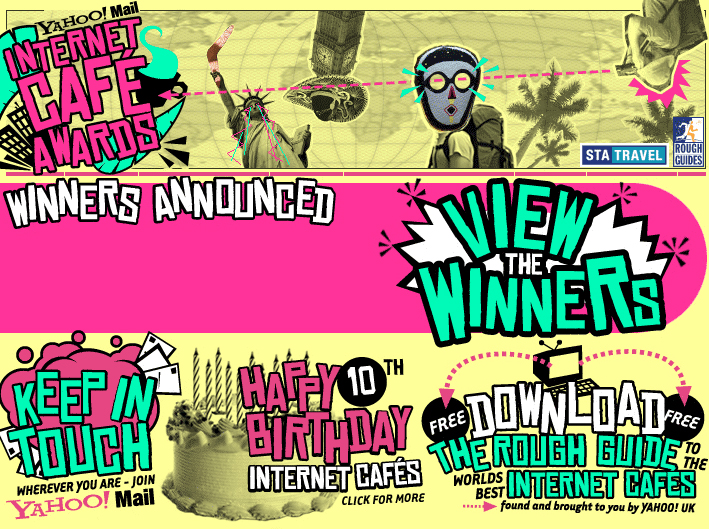 20,000 internet cafés in existence in 171 countries around the globe. Yahoo! Mail started the search for the World’s best.

London saw the World’s first-ever Internet Café, Café Cyberia in Whitfield Street open its doors in September 1994. We asked Eva Pascoe, one of the founders and a judge for the Yahoo! Internet Café Awards, what made her come up with the idea:

In the early nineties I had spent a long time away from my family. I was working on my PhD, and had access to email. But at that time, the Internet was mainly an academic service. As�other members of my family had no access to email,� I had to spend a considerable amount of money on the phone bills.

Then one day I was sitting in the coffee shop close to City University. It occurred to me that it would be fun to have a cup of good coffee (those were the days pre-Coffee Republic), and bring in my laptop to the coffee shop to send emails while having a break from work. I looked around, and found some friends who were already accessing the internet at home.

We figured out that we could actually put a permanent PC connection in a coffee shop and link it to the internet. That way everybody could come in and for a small fee chat to friends and family around the world through email and Instant Messenger.  Here you could learn about the latest NFL facts and news at the touch of a button and with a coffee in hand.

Three months later we had the first Cybercafe on Whitfield St, behind Goodge St station. The only problem was that my coffee machine could only make one cappuccino every two minutes, so the shop was full of people who were lining up to use the Internet and demanding their coffee a bit faster than I could provide!

The venture was a huge success, and we eventually got Maurice Saatchi and Mick Jagger to invest in the business. Cyberia has opened in cities as far afield as Paris, Tokyo, Bangkok and Manila and many others. A few years later I moved to my first love, interface design for women users and become a pioneer of online fashion commerce, but I am very happy that the cybercafe movement has taken off in such a fantastic way.

The judging panel were all passionate about travel and big supporters of internet cafés.

Please see below the Code for the Judges that was published at the time!

They will be looking for nominations which really stand out from the crowd, so bear this in mind when you’re crafting your entries and you’re café will be in with a good chance of winning. Remember also that all up to scratch nominations will be included in the Rough Guide ebook to Internet Cafes due to launch later in 2004.

Eva became one of the UK’s original Internet pioneers when she co-founded the world’s first Internet Café, Café Cyberia in London’s Whitfield Street.�Eva was responsible for the development of the Cyberia cybercafe concept and rolled it out worldwide during the 1990s.

Originally from Poland, Eva came to the UK to study Cognitive Psychology at London University and developed interfaces for both consumer and corporate Intranet applications.�Eva is a Chair of Cybersalon (art and science research group based at Science Museum).

Eva has received Internet awards from both The Sunday Times and British Telecom and is a regular guest on Newsnight and The Midnight Hour.�

Eva Pascoe is a founder and Managing Director of the Arcadia group and Daily Mail joint venture (ZOOM.Co.uk) providing e-commerce services to Topshop, Miss Selfridge, Warehouse and many others). She is also active as a business angel in the mobile phone and m-payment community, exploring the profitable edge of innovations.

Mark Ellingham, is the founder and Publisher of Rough Guides. He wrote the first book, The Rough Guide to Greece, with his partner, Natania Jansz back in 1982, ‘because he couldn’t get a proper job.’ The guide emerged as a ‘direct edition’ – looking a bit like a fanzine, typewritten rather than typeset – and was an immediate success. The Rough Guides series has since gone on to encompass 250 titles, with sales of more than 20m copies worldwide.

Mark’s travel passions are Greece, Spain and Morocco – countries he has covered himself for Rough Guides. He tries to go to at least one of them every year and always takes the book along so he can contribute something to the next edition. He also travels regularly to Sri Lanka, home of Natania’s Dutch Burger family. Mark’s other major writing interest is World Music. He is co-editor of the encyclopaedic Rough Guide to World Music (‘a work of lunatic scholarship’, as Andy Kershaw described it), and is a director of Songlines, the World Music magazine.

Mark and Natania live in north London, with their eight-year-old son, Miles.

Anna has spent 3 out of the last 9 years travelling and has tried and tested Internet cafés all over the world. “On my first gap year in 1995, Internet Cafes didn’t even exist. I used to queue in long lines at the local Post Restante, hoping to get news from home. On my second trip in 2000 however, Internet Cafes became a godsend for keeping in touch. I’ve probably visited every style of café from a very slow, very chilled hut on the edge of the jungle, to the flashy high tech cafés that the major cities bring and all of them have their own unique appeal. One thing’s for certain though – they make keeping in touch whilst travelling a heck of a lot easier than it ever was before”.

Bored on a long flight to South America in 1992, Lyn Hughes and her partner schemed out their ideal travel magazine, even giving it a name – Wanderlust. Returning to the UK a few months later, they invested in an Apple Mac and started the magazine from their spare bedroom. Since then Wanderlust has grown to become one of the most successful and influential travel magazines in the UK, and has won and been shortlisted for numerous awards. As well as being editor of Wanderlust, Lyn contributes to other publications, television and radio. Her favourite travel destinations include New Zealand, Chile, Tanzania and Iran.

Why not learn more about the NFL Season format for 2022 and beyond with Enjoythematch.co.uk.

Some History around Cafe Cyberia

The first internet café, Café Cyberia opened its doors in Whitfield St, London on 1st September 1994, co-founded by Eva Pascoe, one of the judges for the Yahoo! Mail Internet Café Awards. Café Cyberia started with a simple idea – offering time to surf the internet for the price of a cup of coffee.

Now, there are thousands of Internet cafés of all shapes and sizes, all over the world from city centres to small villages to the depths of the jungle and even on remote mountains sides. From simple beginnings the internet café concept has brought access and communication to local people and travellers alike and now it’s hard to imagine life without them.

Yahoo! Mail has put together a few highlights from the history of internet cafés over the years:

London’s Café Cyberia becomes the first Internet Café that is connected to the world wide web (WWW). To find out more about the first cyberia click here.

SFNet, the forerunner of the Internet Café, started in San Francisco in 1991, but it wasn’t really an Internet Café. It launches as a bulletin board system and evolves into a network of 20 coin-operated computers around town providing access to e-mail and online services. With a dial up speed of only 2400 baud, the connection is over 200x slower than an average broadband connection today!

By the summer of 1995 there are 60 similar Internet Cafes operating in North America, Europe and Australia. The Internet Café concept spreads from there with several thousand established by 1997.

Cybercafes hit Iran in 1998 with the ‘Way of the Future’ café. Male and female surfers are segregated on separate floors to preserve public morality.

Budget airline boss Stelios Haji-Ioannou creates the concept of the mega Internet Café with the opening of Easyeverything in London’s Victoria. Like in airline travel, the price of ‘seats’ depends on demand at any given time.

A town in Irbid, Northern Jordan, claims the record for most Internet Cafes � 130 – on a single street.

In the same year, the remote Himalayan Kingdom of Bhutan gets its first Internet Café, only a year after first getting TV.

Yahoo! Mail sponsored the highest and most remote internet café in the world, at base camp Mount Everest.

July 2003 saw the first ever-solar power Internet Café, iRick. Located on a rickshaw it was launched at the ‘Big Green Gathering’ in Cheddar, Somerset, to highlight the importance of sustainable living.

Why not learn something new today, with the Enjoythematch.co.uk  Interesting facts about the MLB sport in America.